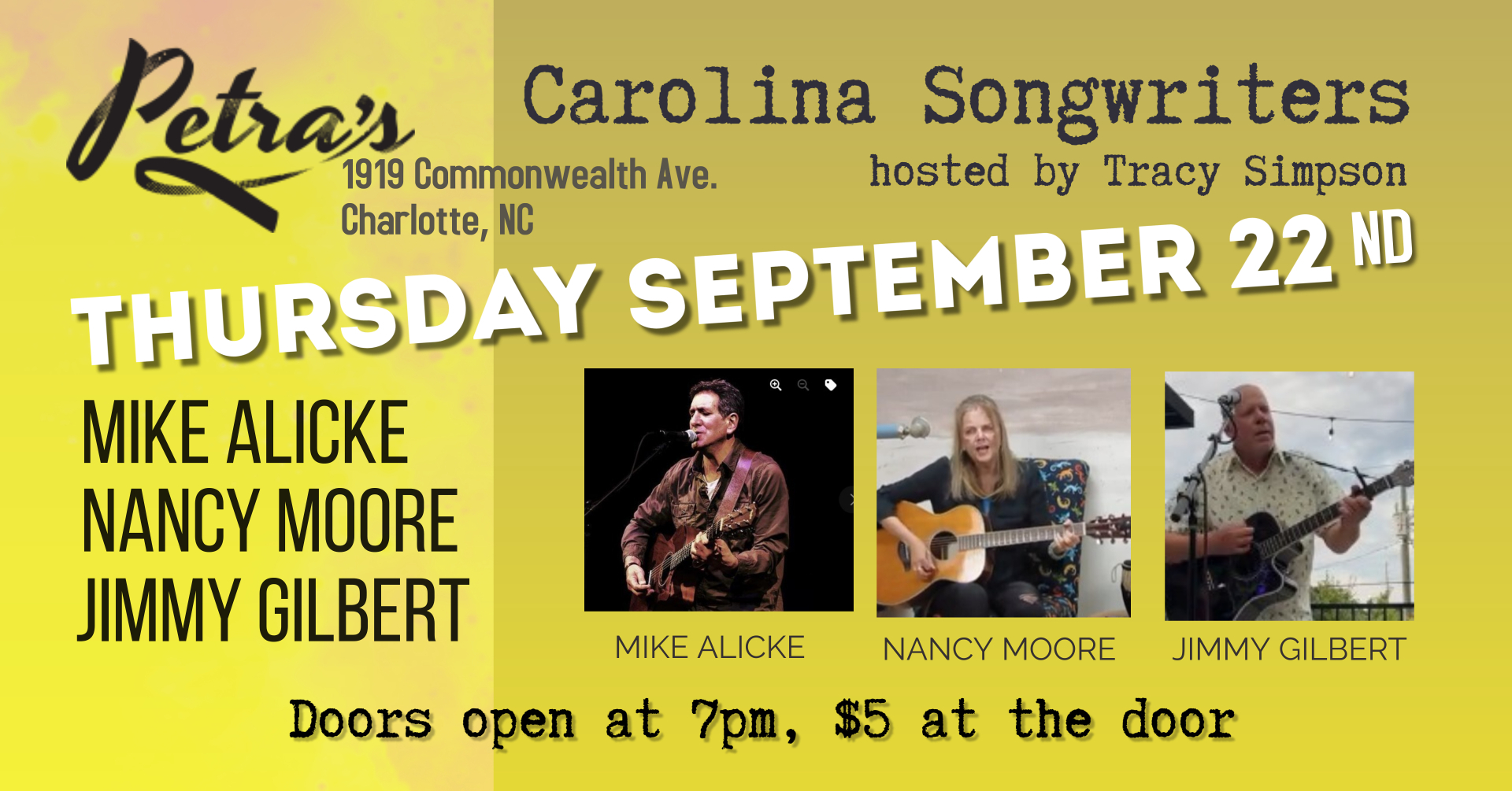 Carolina Songwriters in the round with Tracy Simpson: September Edition

Thursday, September 22nd
Doors: 7pm | Show: 8pm
Tickets: $5 at the door
•21+ with valid ID
Featuring: Nancy Moore, Mike Alicke, and Jimmy Gilbert
Hosted by Tracy Simpson
Nancy Moore is a Charlotte-based songwriter who is releasing her
first single, With You Now, this fall. She is currently in the studio
working on an EP that should be out early in 2023. She
started playing out at local venues a year ago and belongs to the Southern Songwriters Association
Mike Alicke
Mike Alicke is an award winning singer-songwriter-guitarist (2012 Summit Showcase Songwriter Of The Year and Nominated 2013 Songwriter Of The Year by The Charlotte Music Awards) with many years of performing, touring, and recording experience. As founding member of the NY/NJ based acoustic- rock band Alaskan, they recorded several critically acclaimed recordings-including the well received “Red Wheel Spinning” and “Big Timbers” (Spotify)The band was a favorite at NYC’s legendary Bitter End club as well as many other well known venues such as CBGB’s, Wetlands, Mercury Lounge, Maxwells’s etc.. before embarking on a nationwide tour hitting many hot spots such as The Fox Theatre (Boulder Co.), The House of Blues (Chicago), The Georgia Theatre (Atlanta) to name just a few. Now residing in North Carolina, he has been recently named 2012 Songwriter of the Year by the Summit Songwriter Showcase in Davidson, NC as well as nominated for Best Singer/Songwriter for The Charlotte Music Awards. He is currently performing with The Main Channel Band and well as a series of solo shows highlighting some of his best work.
Jimmy Gilbert
Jimmy has been blazing up the Charlotte area as a relatively new singer-songwriter, a transplant from the north, but he has not wasted any time in setting down strong musical roots in this community. Jimmy has perfected what is now known as the “Jimmy Groove,” he is highly sought after as a musical partner, but holds his own as a stellar songwriter with relatable songs and thought-provoking imagery.